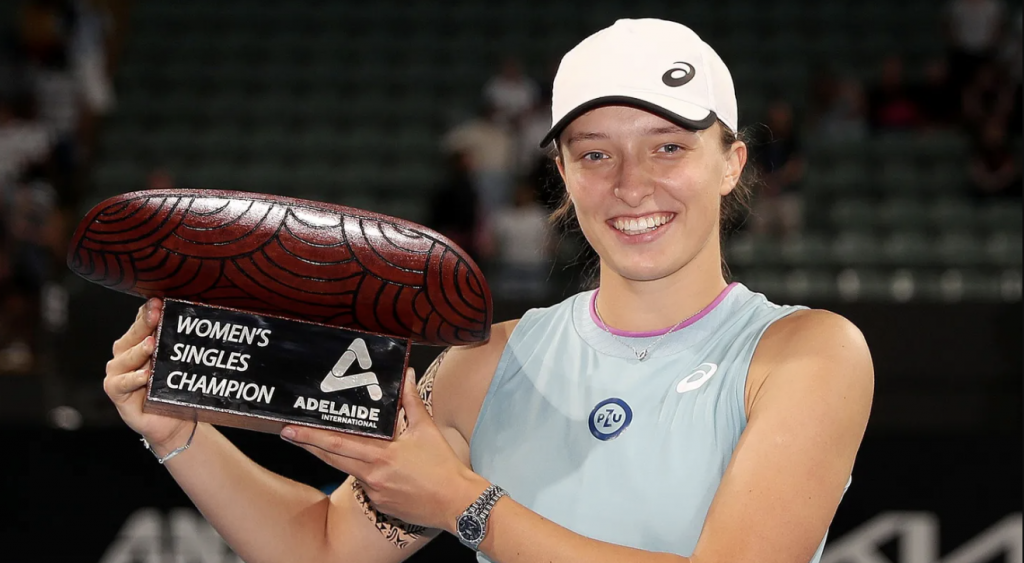 IGA Swiatek has backed up her maiden title win at Roland Garros last year with a dominant 66-minute display against second seed Belinda Bencic in the 2021 Adelaide International final. Swiatek won 6-2 6-2 in an ultra-impressive performance that saw the 19-year-old claim the win. Remarkably, Swiatek did not drop a set throughout the entire 2021 tournament and has now risen to world number 15.

“For sure, there is something that clicks,” Swiatek said of her dominant run. “Not only in my head but also tennis-wise. “I feel pretty good on court. I feel like sometimes I have weeks when everything clicks, and that’s just the effect of the work we’re doing.”

Swiatek was unbeatable on serve, dropping just two points for the entire match off her first serve, and four points off her second serve. By comparison, Bencic only won 60.6 per cent and 36.4 per cent of her first and second serve points, broken four times by her young opponent and unable to create a break point opportunity.

“I struggled a lot today with how different she played,” Bencic said post-match. “I just couldn’t figure out her patterns or her serve or anything at all.

“It’s the unpredictable-ness. “I think she plays everything just little bit different than I’m expecting. “So not the usual patterns which you would expect. I think I’m a pretty good anticipator. “But today it was a little bit off – of course, thanks to her game.

“Then I think she plays with much more spin and heaviness. Also the balls you think you can reach are just jumping over you. “It makes it harder to make a defence, to counterpunch.”

After remarkably winning her maiden title at Roland Garros last year, Swiatek eyed off being more consistent in 2021, something she can tick off early in the year, and a goal she hoped to continue throughout the season.

“It’s good for me because I can see that I can play good tennis for the whole week,” she said. “It wasn’t like one time during the French Open. “It gives me more confidence that I’m more developed [as a] player and I can play good more often. It just gives me motivation.

“Our goal right now is to have that more often, because I know I can play great tennis. “It’s just all about planning, aiming for the specific tournament to have the best shape possible.”