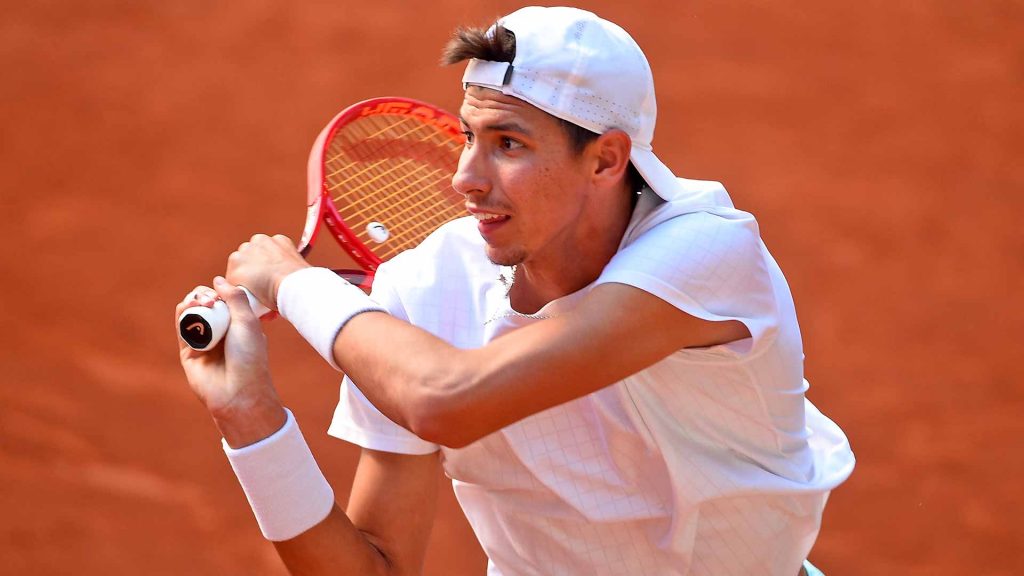 AUSTRALIAN rising star Alexei Popyrin has knocked off his Italian counterpart in straight sets, defeating Next-Gen ATP Finals winner Jannik Sinner, 7-6 6-2 at the Madrid Masters 1000. In a day of huge results, Popyrin booked his spot in the Round of 16 with the upset over the 14th seed, in a match that lasted 95 minutes. After winning the first set in a tiebreaker 7-5, Popyrin stormed away with some crucial breaks in the second set to win it well.

“I think it was to stay level-headed after I got broken in the first game. “We had a tactic that I tried to implement in the first game. “I couldn’t quite get my aim. But I knew I would have chances, like most do. “I just had to capitalise on them when they came,” Popyrin said post-match. “That’s what I did, I guess… I have had a pretty good record in tie-breaks this year. “I felt confident going into the tie-break. “I just tried to stay level-headed.”

The Australian won 75 per cent of his first serve points, putting down eight aces to Sinners’ none, and breaking him four times, whilst saving three of five break point opportunities himself. He advances through to the Round of 16 at the ATP Masters 1000 event to play the toughest opponent you can on this surface – King of Clay Rafael Nadal. The number one seeds destroyed the player many believe to be his heir apparent in teenager Carlos Alcaraz.

“He has a lot of potential. He’s young and [a] good guy,” Nadal said post-match. “He already has a great level of tennis today, but I really believe that he’s going to be a fantastic player in the near future.

“I wish him all the very best. [As a] Spanish player and Spanish [tennis] fan, I really believe that we need somebody like him, and it’s great to have him here.”

The birthday boy – turning 18-years-old on the day of the loss was no match for the raging Nadal, who continued his ridiculous winning streak on clay with a 6-1 6-2 victory. Nadal won in just 78 minutes on court, only dropping five points off his first serve, and attacking Alcaraz’s serve with a massive 63 per cent success rate. In what was ultimately one-sided traffic the whole way through, the teenager got a lesson in what it takes to be the best, winning just 27 points for the match (33 per cent) and watching poetry in motion.

On facing Popyrin in the Round of 16, Nadal said he was looking forward to the challenge and had liked what he had seen from the Australian who had some big weapons he would need to be ready for in the clash.

“He has a huge serve, great forehand, young… Another tough opponent. But here we are in Masters 1000, so we can’t expect another thing,” Nadal said. “I hope to be ready to play well. That’s what I am going to need every single day if I want to have chances to keep playing. Tomorrow is another tough battle. I hope to be ready.”

In other results, fifth seed Alexander Zverev strolled past Kei Nishikori to set up a Round of 16 clash with Brit Daniel Evans, following the latter’s come-from-behind win over Australian John Millman. American John Isner upset ninth seed Roberto Bautista Agut in the Spaniard’s home country, 6-4 6-7 7-6 in a match that went down to the wire of two hours and 23 minutes. The other seed to fall was Diego Schwartzman, with the seventh seed Argentinian knocked out by Russian Aslan Karatsev 2-6 6-4 6-1, while clay court specialist Casper Ruud won through to have a crack against fourth seed Stefanos Tsitsipas who destroyed Benoit Paire. Other winners were 16th seed Cristian Garin and Argentinian qualifier Federico Delbonis.

MADRID OPEN ROUND OF 32 RESULTS: