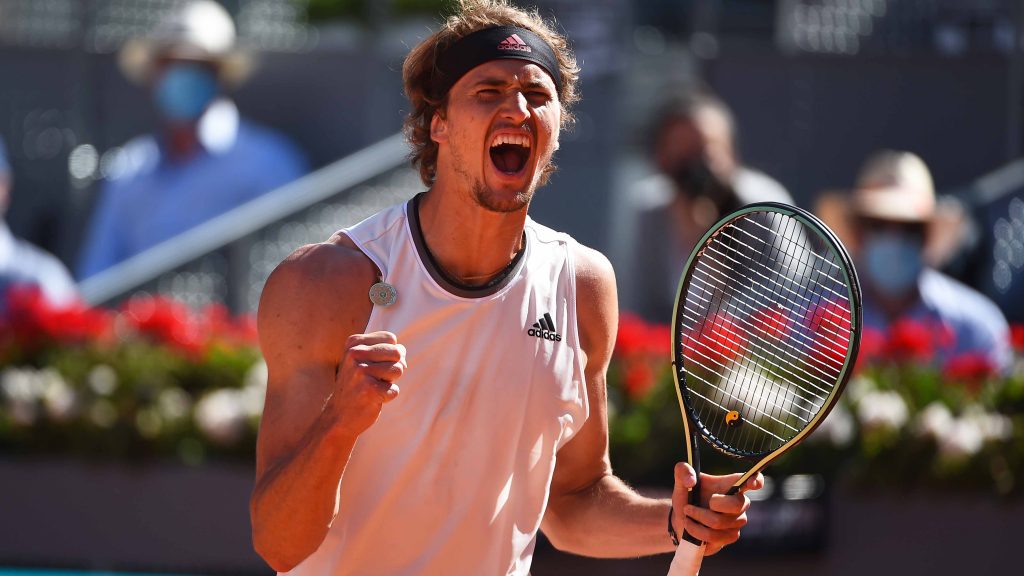 ALEXANDER Zverev has found the winning formula to defeating Rafael Nadal, and it has now stretched to the clay courts, defeating the top seed Spaniard in straight sets to book a 2021 Madrid Masters 1000 semi-finals spot. The German fifth seed backed up his wins in the 2019 ATP Finals and 2020 Paris Masters with a third straight win in the Madrid Masters, but this victory was different. It was back on clay and in Nadal’s home nation, where the King of Clay is near-unbeatable. By the time the match ended, Zverev had won 6-4 6-4, coming back from 2-4 down in the first set to post the win in one hour and 44 minutes.

“[It is] definitely one of the biggest wins of my career so far, especially on clay against Rafa. It is the toughest thing to do in our sport,” Zverev said post-match. “Beating him in his house, in Spain, is incredible but the tournament is not over yet.”

The German served four aces, won 82 per cent of his first serve points, and broke Nadal three times to one during the match to secure his spot in the last four. Zverev won here in 2018, and holds a 13-2 record, also not dropping a set thus far in the 2021 edition. In the 2018 final, Zverev knocked off Dominic Thiem, which was the only time the German has been the third seed Austrian on clay. Thiem has an 8-2 head-to-head record against Zverev, and 4-1 on clay including the memorable come-from-behind five-set US Open final.

“I know that I can do it [against Dominic],” Zverev said. “Everyone remembers the US Open final that we played. “I remember it certainly and it is still going to be in the back of my mind when we play tomorrow. “I am looking forward to the match.”

Thiem had to get himself out of trouble after losing the first set and having to save several break points in the fifth game of the second set to remain in the contest against American John Isner, going on to post a three-set win. The Austrian broke his opponent in the penultimate game of the match to take out the deciding set and win, 3-6 6-3 6-4 to set up the huge semi-final with Zverev.

“I think we all know that he is one of the best servers in history and the altitude here in Madrid makes it even tougher to return his serve,” Thiem said post-match. “I was a little bit surprised by his return games. I think he actually attacked both of my serves, the first and the second, and it took me a while to get used to it. If you start a break down against guys like John, it is like starting a set down. I think the momentum of the whole match changed when I saved those four break points in the second [set].”

Isner served 18 aces without a double fault, and won 77 per cent of his first serve points. He managed to match Thiem on return points off his second serve, but could not convert more than one of his seven break point chances which proved costly. Thiem on the other hand managed to convert the two from four, and won a higher percentage of first serve points (79 per cent).

In the other quarter finals results, eighth seed Italian Matteo Berrettini came from a set down to storm to victory against 16th seed Chilean Cristian Garin, not dropping a game in the deciding set to win, 5-7 6-3 6-0. That victory set up a final four meeting with Norwegian Casper Ruud who knocked off Kazakhstan’s Alexander Bublik, 7-5 6-1. Zverev and Thiem are up first at 4pm local time ahead of the women’s final between Ash Barty and Aryna Sabalenka, with the Ruud-Berrettini semi-final at night.