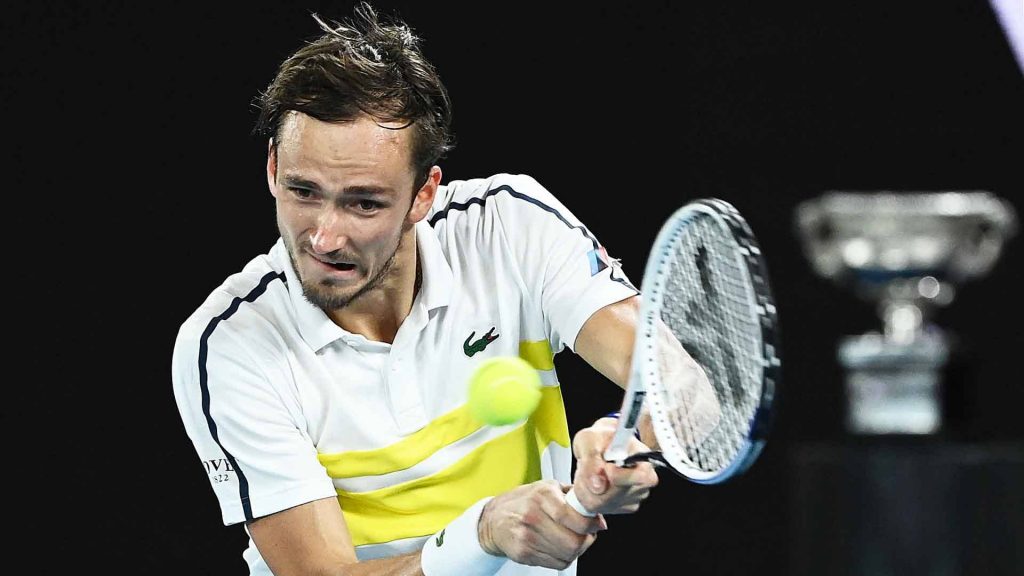 FOURTH seed Russian Daniil Medvedev will lock horns with world number one Novak Djokovic in a massive Australian Open final after earning his spot in the decider last night. The Russian won through in straight sets over fifth seed Stefanos Tsitsipas, 6-4 6-2 7-5 in two hours and nine minutes in an impressive performance.

The fourth seed was ruthless across the court, hitting 46 winners to 19 across the match, and only 21 unforced errors to 30 in a message to Djokovic to show he is ready to win a Grand Slam title. He broke five times from nine chances compared to his Greek opponents’ one from three, as well as winning 42 per cent of his receiving points compared to the fifth seed’s 23 per cent. One positive for Tsitsipas was his net dominance, claiming 24 of the 31 approach shots, while Medvedev won 54 per cent.

“It was definitely not easy, because we saw the match with Rafa (Nadal) was kind of the same score after two sets. [In] the third set, Rafa was dominating but didn’t manage to win the match, so I got a little bit scared and tight,” Medvedev said post-match. “It is the semi-final of a Slam… It was not easy, but I am happy I managed to switch my game on, especially in some tight moments on my serve and I am really happy to be in the final.”

The near-clinical second set was a highlight for the Russian, smashing 14 winners to only four unforced errors, while Tsitsipas claimed six and 11 respectively. Medvedev produced a whopping 84 per cent efficiency, and only dropped three points on serve, while his opponent won just 14 of 30 and was broken twice. The third set was closer as Tsitsipas tightened up with only one more unforced error to winner (eight to seven), but Medvedev stepped it up to slam home 18 winners to eight unforced errors and break a crucial second time in the final game of the match off a couple of forced errors to book his place in the final.

Medvedev’s victory meant the Russian has won 20 consecutive matches, including the clean sweep at the ATP Finals last year in a remarkable effort. The most in-form player on the ATP Tour will play the greatest Australian Open player in Djokovic when the pair meets tomorrow night.

”I don’t have an answer [to explain my run]. I was just working hard all my life and I am really happy at this moment,” Medvedev said. “It is going to stay with me… It is a great achievement.”

”I like that I don’t have a lot of pressure, because he (Djokovic) never lost in the eight times that he was here in the final. “It is he who has all the pressure, getting to Roger (Federer) and Rafa in the Grand Slam [leaderboard]. I just hope that I am going to get out there and show my best tennis. As we have seen, I can beat some big names if I play good so that is the main part. He has more experience, but he has more things to lose than me.”