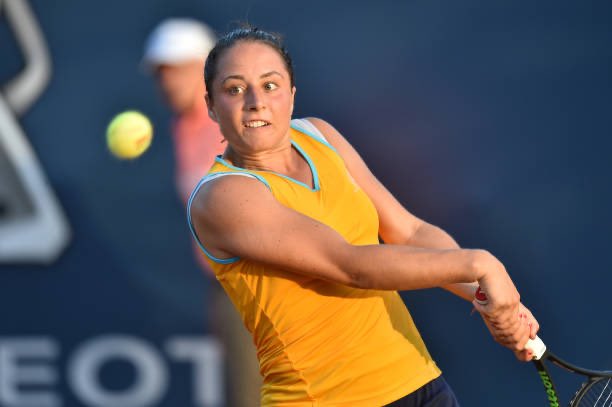 ITALIAN teenager Elisabetta Cocciaretto has continued her remarkable run, with a stunning victory over top 30 player, Donna Vekic at the Palermo Ladies Open. Spurred on by a home crowd advantage, Cocciaretto backed up her first ever top 100 victory – over Polona Hercog – in the first round with an even better win over the sixth seed Croatian on day three.

Cocciaretto stormed past Vekic 6-2 6-4 in a stunning performance that sees her catapult well inside the top 150 for the first time in her career, and potentially eye off a top 100 spot with a deep run in Italy. Her consistent serving played a part with a healthy 65.2 per cent of her first serves going in, and a similar effectiveness in winning them. The second serve was much more comprehensive compared to her opponent, winning 58.3 per cent of her second serve points to Vekic’s 44.1 per cent.

Vekic’s job was made more difficult by the fact her serve completely abandoned her, producing a whopping seven double faults and running at a poor 46.9 per cent serving efficiency. While she managed to break her younger opponent once from five chances, Cocciaretto broke Vekic four times during the two sets on her way to a straight sets victory in an hour and 35 minutes. It was a comprehensive win for the 19-year-old who now awaits the winner of fourth seed, Anett Kontaveit and German Laura Siegemund.

Of the three other winners, fellow Italian Sara Errani and Frenchwoman Fiona Ferro continued their form to lock in a quarter finals clash. Errani downed Kristyna Pliskova 3-6 6-4 6-3 in a two-hour come-from-behind win, while Ferro looked in control in the second set against eighth seed Russian, Ekaterina Alexandrova after a tight first set, to post a 7-5 6-2 win in an hour and 49 minutes.

The fourth match of the day was Belarusian Aliaksandra Sasnovich‘s big win over the third Italian on court in Jasmine Paolini. Sasnovich has not missed a beat at Palermo, storming through qualifying and into the final eight. She easily pushed past Paolini with a 6-0 6-2 win in just 72 minutes of action. Paolini was far from poor though, creating eight break point opportunities, but the strength of Sasnovich on serve saved all of them, while breaking her opponent five of a possible six times in a rather unfair scoreline of 6-0 6-2. With just 16 points won on serve for the Italian, it was always going to make life difficult.

Both Cocciaretto and Sasnovich will be able to have an extra day’s break over their opponents, with Kontaveit and Siegemund first up tomorrow on Centre Court, before top seed Petra Martic and qualifier Liudmila Samsonova battle it out for the right to face Sasnovich. In the last two games, Camila Giorgi and Kaja Juvan go head-to-head, with the winner to take on either seventh seed Dayana Yastremska or Frenchwoman Oceane Dodin in the last quarter final.