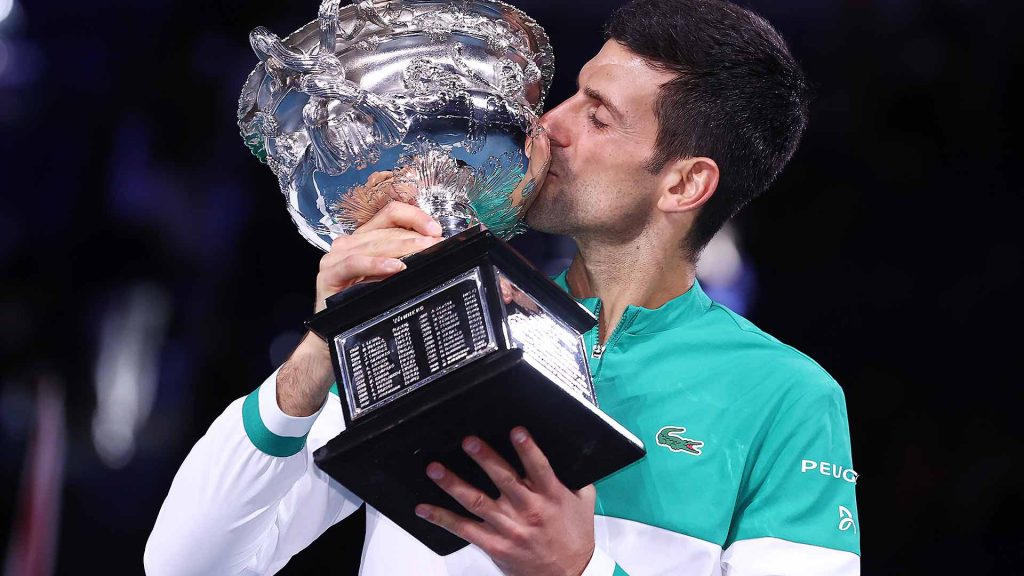 “I think it was a very successful tournament and I’d like to praise [tournament director] Craig Tiley for a tremendous effort,” Djokovic said. “It was challenging on many different levels and Tennis Australia should be very proud for making it possible.”

Fans heading down to Rod Laver Arena predicted the night to be a nail-biter considering the form of Medvedev, and the muscle tear that has been plaguing Djokovic throughout the tournament that almost saw him bow out to Taylor Fritz in the fourth round. But instead it was the Serbian who raced away to a strong start going 3-0 up with an early break, forcing his opponent on the back foot. Medvedev fought back to secure a break himself, but with Djokovic up 6-5 in the first, he saw his chance. He lifted his aggression in the twelfth game and set up three set points, of which he made good on the third one to win the opening set 7-5.

The Serbian was far from clinical though, only serving the two aces and hitting 12 winners for seven unforced errors, compared to 12 and nine for Medvedev. His work at the net was already causing headaches for the Russian with all of his seven net charges being successful. The game became more about which player would yield first as Djokovic was not hitting his high volume of winners credit to Medvedev’s work rate across the court, but the Russian was also not able to really able to hold his own serve either, broken three times to one in the second set. Despite only winning seven less points than his opponent (20-27), Medvedev could not capitalise off the Serbian’s serve, and struggled on his own second serve.

The third set was even stranger with neither player serving an ace, but Djokovic well and truly in control of the match with consistent serving. He actually hit three less winners (4-7) but had eight less unforced errors (5-13) which was the story of the match. The world number one also broke twice from his two chances, and was more clinical at the net (83 to 67 per cent success), as he won seven more points than Medvedev for the set again (28-21). In the end, the match lasted just one hour and 53 minutes with the world number one taking home a remarkable ninth crown.

“It has been definitely emotionally the most challenging Grand Slam that I ever had with everything that was happening, injury, off-the-court stuff, quarantines. It has been, least to say, a roller-coaster ride in the last four weeks,” he revealed.  “It was very challenging for me to keep my mind serene and keep my focus directed into what matters the most. I have put a lot of energy and time, along with my team, to be here sitting with a trophy. “So I’ll take a lot of positives out of this month here in Australia.”

While the disappointment for Medvedev was real – the Russian is still yet to win his maiden Grand Slam – he did receive some good news, with the fact he will become the world number three today, rising above US Open winner and last year’s Australian Open runner-up, Dominic Thiem.

“Congratulations to Novak and your team,” Medvedev said post-match. “Nine Grand Slams in Australia and 18 in total is an amazing thing and it is probably not your last one.”