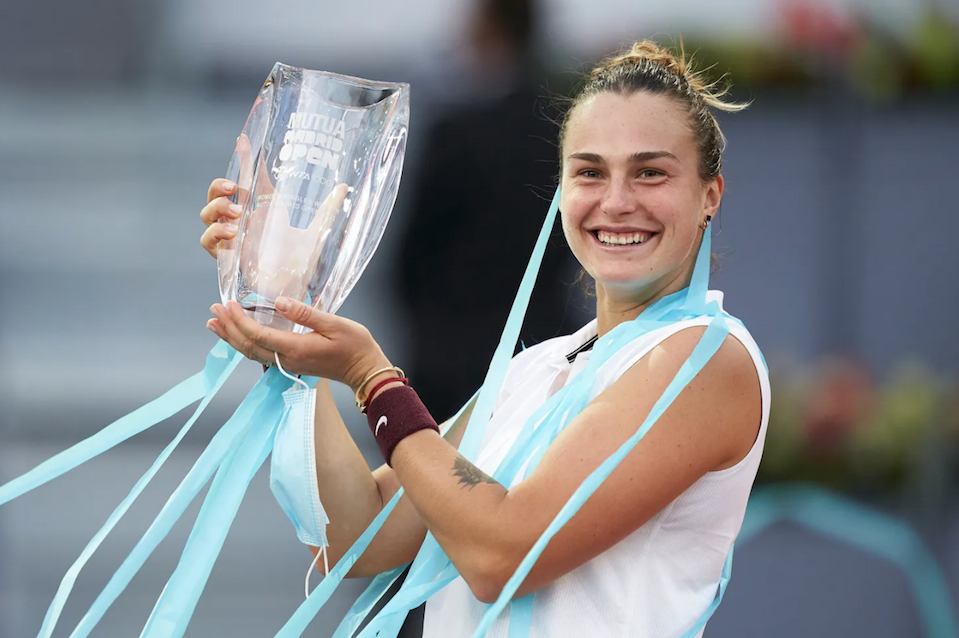 ARYNA Sabalenka has reversed the result of the Porsche Tennis Grand Prix in almost stunning style to defeat world number one Ash Barty and claim the 2021 Mutua Madrid Open title. The Belarusian fifth seed did not even drop a game in the first set – something she conceded to Barty in the second set of their previous final – before holding on in three sets to win, 6-0 3-6 6-4 4. It was Sabalenka’s first ever clay court WTA Tour title.

“I’m not really scared of this surface any more,” Sabalenka said post-match. “Before I was too much thinking about the clay court, that this is surface not for me, that it’s really tough to play on this surface, it’s long rallies. I was really too much thinking about this. This year I relaxed and just play my game. I worked a lot on the movement, so I prepare myself really well for the clay court.”

The win over Barty was an important one, having lost to Barty not only in the Stuttgart decider, but also the Miami Open quarter finals last month. Having not dropped a match in 16 encounters on clay, the Australian was the most in-form player in the competition. Sabalenka has traditionally struggled at high-level events, but defied her critics by beating the best in the world and winning the title.

“I wouldn’t compare match in Miami and here to Stuttgart,” Sabalenka said. “Stuttgart I was injured. “It’s tough to say anything about that match. “She was just unbelievable. “I gave her opportunity there, and she took it. “In Miami, it was really slow courts, long rallies. It was really hot. “There, physically I would say it was much harder to play against her than here.

“I think what I did really well here, I stayed focused from the beginning till the end. “I was putting her under the pressure, especially in the end of the third set. “In those key moments I was a little bit more aggressive. “That’s what really helped me to win this match.”

Sabalenka produced nine aces to three in the one-hour and 39-minute final, whilst winning 69.8 per cent of her first serve points, compared to Barty’s 62.5 per cent. She also broke the Australian five times to three – three of Sabalenka’s which came in the first set – and won 56.5 per cent of her return points. The defeat was hard to take for the Australian who took it with grace and said Sabalenka was outstanding, particularly in the first set.

“She takes the ball out of my court and essentially takes the racquet out of my hand when she serves the way she did in the first set,” Barty said post-match. “I gave her a few too many looks on second serves. “She’s able to dominate and take that away from me. “I guarantee it won’t be the last time that it happens. “I’ll continue to fight and try to find a way back in each and every time.”