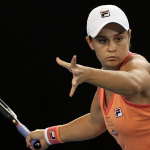 THOSE Australians wanting more Ash Barty will get what they wished for after the world number one made a surprise late charge at the 2021 Adelaide International WTA 500 event. The tournament was initially featuring a stacked field, but with many of them reaching deep into the Australian Open, withdrawals had left the tournament without a Top 10 player. Then came Barty.

The Australian reached the quarter finals of her home Grand Slam during the week, and has opted to play another tournament Down Under having missed out on so much tennis in the past 12 months. Unsurprisingly, the tournament committee was more than happy to hand her a wildcard alongside fellow Australians Olivia Gadecki – coming off a stunning win over Grand Slam winner Sofia Kenin – Sam Stosur and Ajla Tomljanovic.

The field for the Adelaide International is not the strongest one, but still features some great young talent alongside some players really hoping to build better form in 2021. Roland Garros reigning champion Iga Swiatek could loom as one of the main threat’s to Barty’s crown, with the 17th ranked Pole coming in as the fifth seed. Fellow young gun, Yulia Putintseva is seventh seed and one of seven Top 30 competitors at the event.

Elise Mertens is the one to watch, with the tricky Belgian flying under the radar at times, but has the capacity to push for a Top 10 spot, currently ranked 16th and coming in as the fourth seed. Belinda Bencic and Johanna Konta round out the top four players at the event, with both the Swiss up-and-comer and British talent looking to have better outings than their third and first round exits at Melbourne Park. Sixth seed Petra Martic is in the same boat, exiting the first Grand Slam of the year in the Round of 128 and now the world number 19 is hoping to impress here.

The withdrawals from the tournament include Australian Open runner-up Jennifer Brady, and young guns Bianca Andreescu, Elena Rybakina, Dayana Yastremska and Marketa Vondrousova. Instead a number of Chinese and French hopes have come into the tournament, with Zhang Shuai, Zheng Saisai and Wang Qiang joining eighth seed Qiang Wang in the draw, as well as Caroline Garcia and Kristina Mladenovic. American duo Danielle Collins and Shelby Rogers are also among the inclusions following the withdrawals.

While the Australian Open did not go to plan for the world number one, the Barty Party is predicted to roll on in Adelaide, with the Australian star a winner her 12 months ago and is clearly the best player in the draw. Mertens and Swiatek are the biggest threats to her crown based on their form, while one of the other seeds could finally click into gear in 2021 and cause some headaches.