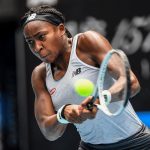 THE Adelaide International qualifying rounds have begun, with a flurry of American and Australian competitors taking the court in South Australia and at least one player from each of the two nations playing in each match. They combined for eight of the 12 winners on the day, including top seed youngster Coco Gauff and unseeded wildcard Storm Sanders, who disposed of second seed American Bernarda Pera in three sets.

In an interesting stat, the top four seeds all hailed from the United States, with just Pera falling from that group. Gauff was clinical in her encounter with Great Britain’s Francesca Jones, disposing of the Brit in 64 minutes and joined by Madison Brengle, Christina McHale and Caty McNally on the winners list. Also hailing from the United States but falling in the first round was Asia Muhammad, who stole the first set from Italian Jasmine Paolini but eventually fell in the lone two-plus hour encounters of the day, going down to the sixth seed 4-6 6-3 7-6.

Heading to the Australian winners, and it was Maddison Inglis, Astra Sharma and Ellen Perez who joined Sanders in the second round, with Inglis knocking compatriot Belinda Woolcock out of the running. Destanee Aiava, Arina Rodionova, Lizette Cabrera, Ivana Popovic and Kimberly Birrell will all remain on the sidelines on home soil, unlucky to all draw seeds. Sanders and Sharma impressed with their three set victories over Pera and Lesia Tsurenko showing plenty of intent ahead of the second round.

The qualifiers will continue today with the first round beginning on Tuesday.