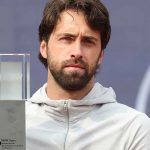 Basilashvili won 6-4 7-6 in one hour and 26 minutes, weathering a storm of 13 aces to put down six himself, whilst breaking Struff the one from two chances and saving the only break point he faced. It was truly a match of the power servers, and the Georgian was able to capitalise more, only dropping 16 points on serve in total, which was five less than his German opponent, as both players were ultra-impressive, but the Georgian won in the clutch moments, including a 7-5 second set tiebreak.

“It wasn’t easy and I was super-tight at the end,” Basilashvili said post-match. “It was very difficult. It’s never easy playing Jan, he’s a very big fighter and serves really well. I am super happy. It seems like German conditions suit me. This is my fifth [ATP Tour] title and it will give me confidence for the upcoming tournaments.”

In Portugal, Ramos-Vinolas found himself a set down against an in-form Norrie who wanted to move to outright third on the table of 2021 ATP Tour wins this year. Unfortunately for the Brit – who was subsequently searching for his maiden ATP Tour title like Struff – the Spaniard had other ideas, coming back to win the second set, then holding out in a third set tiebreaker 7-3, to win 4-6 6-3 7-6 in two hours and 44 minutes. Ramos-Vinolas served eight aces to Norrie’s six, and won 66 and 59 per cent of his first and second serve points compared to the Brit’s 62 and 49 per cent, though both players broke an identical four times from 11 chances.

“It means a lot [to win the title]. I won three tournaments in my career, so this is one of the best three weeks in my career. I am really happy,” Ramos-Vinolas said post-match. “It was a really difficult match against Cameron. I think he played a really good tournament. I am happy for me, but he is a really good friend of mine and I am sorry for him, because I think he deserved to win the tournament as [much as] me.”

Ramos-Vinolas moved to 16 wins on clay courts on the 2021 ATP Tour, nine clear of his nearest rivals which will hold him in good stead ahead of the Madrid Open which got underway with the first few matches. Eleventh seed Denis Shapovalov moved through with a convincing 6-1 6-3 victory over Serbian Dusan Lajovic, with Kazakhstan’s Alexander Bublik and United States’ Tommy Paul also claiming straight sets victories over Hungarian Marton Fucsovics and Spaniard Pedro Martinez respectively. In the closest match of the day, Australian Alex de Minaur came from behind to defeat Spanish wildcard Jaume Munar, 4-6 7-5 6-1 to moved through to the Round of 32.

MADRID OPEN ROUND OF 64 RESULTS: 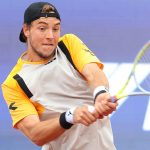 GERMAN Jan-Lennard Struff will eye off his maiden ATP Tour title after downing Belarusian qualifier Ilya Ivashka to reach the final of the BMW Open in Munich. The 87-minute victory came after Ivashka had disposed of his top ranked compatriot Alexander Zverev in the quarter finals, with Struff doing it a lot easier, 6-4 6-1 in 87 minutes of action.

The seventh seed’s win mean the home nation hero was finally able to break through to an ATP Tour final after previously reaching the semi-final stage of an ATP Tour tournament on seven occasions. Having been broken early and trailing 3-0, Struff looked in a bit of trouble until he won 12 of the next 13 games in a one-sided result much to the pleasure of the German crowd.

“I am happy to have reached my first final on home soil in Germany and I will try my best tomorrow,” Struff said post-match.

The German will now face fellow unseeded talent Nikoloz Basilashvili who has been there and done it before, collecting four ATP Tour titles, the most recent of which occurred in Doha earlier this year. Much like Struff the Georgian also came from a slight deficit – albeit only the opening game in this case – to string together the next nine matches to win the first set 6-1 and lead 3-0 against second seed Casper Ruud. Basilashvili eventually won the second set 6-2 with three of the last four games, to upset the highly ranked Norwegian and roll into the decider.

“I am feeling good and I am feeling fresh,” Basilashvili said post-match. “I am looking forward to the final. “I feel confident here and the court suits me, so it will be an interesting match tomorrow as we played recently in Italy.”

The interesting factor will be Basilashvili’s extra workload during the day after the Georgian defeated Slovenian lucky loser Norbert Gombos 6-4 6-4, and Ruud had taken down Australian eighth seed John Millman in the other quarter final 6-3 6-4, before having to head out on court for the semi-final last night.

Meanwhile in the other ATP 250 event, unseeded Brit Cameron Norrie booked his unlikely spot in the Estoril Open final in Portugal. Norrie overcame sixth seed Marin Cilic to make his way into the decider following two tight sets 7-6 7-5, and will take on seventh seed Albert Ramos-Vinolas in today’s final after the Spaniard took care of compatriot, eighth seed Alejandro Davidovich Fokina in the other semi-final, 6-1 6-4.

“I was really tough. I started a little bit slow and managed to ease my way into the match. [I] played really good when break point down and went after it,” Norrie said post-match. “[Marin] was serving great and it was really tricky to get his first serve back… I am fortunate to get through and I am just happy to be in my second final.”

Norrie is having some sort of season, having claimed 18 ATP Tour victories this season, ranked equal third overall with Italian Jannik Sinner, behind Greek star Stefanos Tsitsipas, and red-hot Russian Andrey Rublev (26). Going into outright third might be a challenge in this match though, as the Brit looks to overcome a 2-0 head-to-head advantage that Ramos-Vinolas has in their clashes thus far. 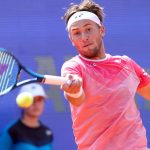