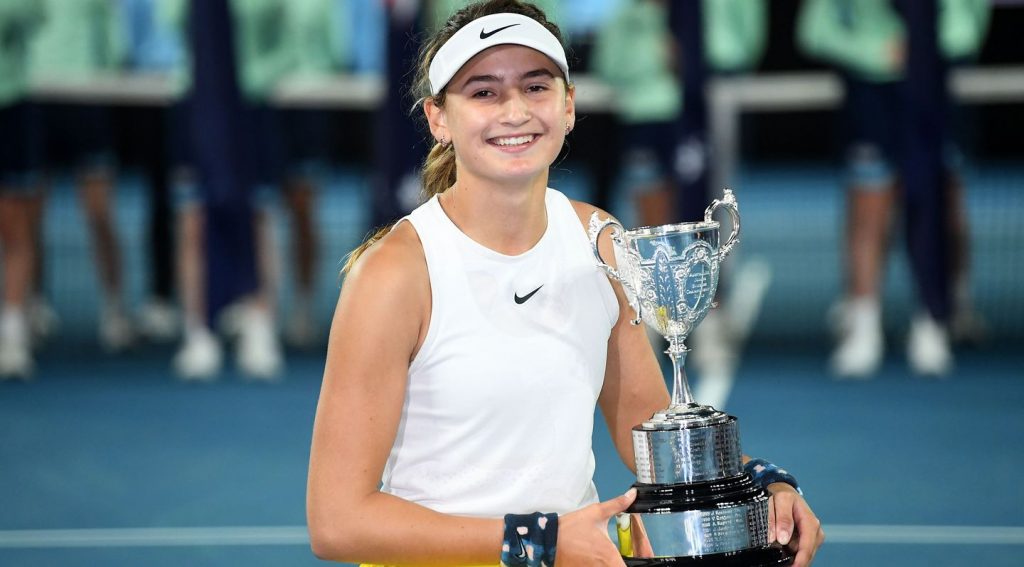 WHILE this 15-year-old Andorran may not be on your radar quite yet, Victoria Jimenez Kasintseva is one to watch in the future with her youth and potential making her a hugely exciting player coming up the ranks on tour. While not technically yet on the WTA Tour singles rankings, Jimenez Kasintseva is a left-handed talent with plenty to prove, going from being ranked 25th on the International Tennis Federation (ITF) Junior world rankings in 2019, to rocketing into top spot after winning the 2020 Junior Australian Open on her major debut. She is now nestled comfortably in second on the rankings, only behind Elsa Jacquemot after the French 17-year-old took out the Junior Roland Garros.

Looking at what makes Jimenez Kasintseva such a threatening youngster, and her father’s professional experience in tennis is one of the standout reasons why. While Joan Jimenez Guerra did not make it into the top 500 in his day – 1999 – his elite tennis knowledge and coaching expertise has allowed the now 15-year-old to develop at a rate of knots.

“It’s my parents that gave me that fighting spirit. It’s them. It’s just (who I am),” Jimenez Kasintseva said, following her Australian Open title. “I’m competitive in and out of the court. I was born with it. But also, losing is learning and if you want to be a tennis player, you have to learn to lose. It’s part of the game.”

Factoring in Jimenez Kasintseva’s proven competitiveness and never-say-die attitude – with four of her six wins at the Australian Open coming in three sets – and the youngster’s clear affinity for all surfaces, with 21 wins and just three losses to her name in 2020, there is no doubt she will be a force to be reckoned with over the coming years.

“At the moment of victory in Australia, I don’t remember what I was thinking – I was just so happy,” she said ahead of the Junior Roland Garros in late September. “It was something so different to me and a unique feeling. I didn’t think I would be in that position.”

Following her history-making win for Andorra in January, tennis has proved hard to come by due to the restrictive nature of COVID-19 and its continuous repercussions. While the ITF Tour continued in August alongside both the WTA and ATP Tours, the youngster has been limited in how much she can compete but collected her first win out of lockdown, the J1 Plovdiv Cup tournament in Bulgaria in late October.

“With lockdown, I lost track of my tennis a little bit,” she said. “It has been very hard for me to come back and I have had some tough moments and some tough tournaments.”

With very little experience on the professional tour, it still remains to be seen whether Jimenez Kasintseva can take that next step and provide a thorn in the side of more than just players her own age. That being said, with eight ITF titles over 2019/20 – six alone in 2019 –  across five different ITF grades, the youngster has proven she is more capable of stepping up to the next level, and seems to flourish at each progression.

“I try to go step by step… I will see. I just go little by little. I don’t want to rush. Tournament by tournament.”

While the 2021 Junior Australian Open has unfortunately been delayed due to COVID-19 limitations around international travel to Melbourne in January, the youngster will be relieved to know she has a real chance of backing up her maiden win and proving it was more than a one-time victory.