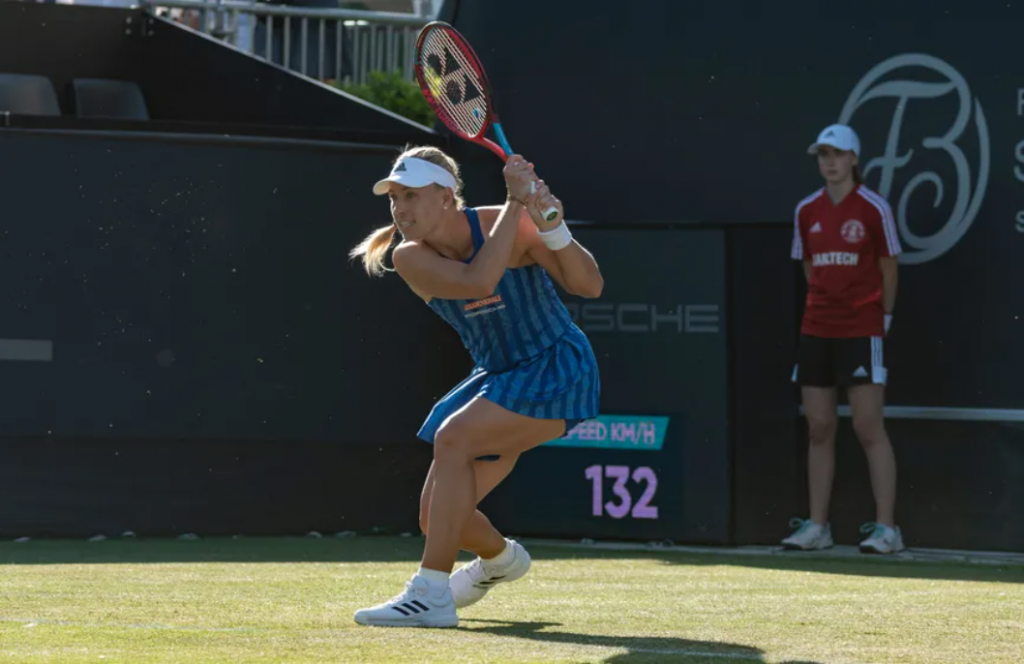 WITH the opening day of Eastbourne delayed due to rain, just the Bad Homburg event played out on Monday, as Day 2 rolled around fast.

All five of the day’s seeds proceeded to the second round, in a successful day for the tournament’s top talents. Top seed Petra Kvitova and fourth seed Angelique Kerber both drew qualifiers, with Kerber claiming the quickest win of the day, sweeping Russian Ekaterina Yashina 6-1 6-1 in just 50 minutes. On home turf, Kerber looked confident and comfortable.

“Of course, it’s a great feeling to win the first match, especially here in Bad Homburg, which is a really special tournament for me,” Kerber said. “To play in front of the home crowd, it’s always something I’m looking forward to and really excited [about]. “It was a good win for me, and I was feeling really well on the centre court tonight.”

But Kvitova had a much tougher time against Poland’s Katarzyna Piter, dropping the first set before firing in the second and holding on in the third to claim the 4-6 6-1 6-4 victory in just under two hours. The Czech was uncharacteristically error-ridden on serve, registering six double faults for 10 aces, but overall was more consistent on serve than her opposition winning 74 per cent of her first serve points.

“I felt kind of a mix of emotions,” Kvitova said post-match. “I was pretty happy to be back on the grass. “On the other hand, I thought I was probably going to play a little bit better. “It was my third hit after my injury, so I probably expected a little bit more from myself than I really showed today.”

“In the end I won, so that’s a pretty good result,” she added. “I found a few games where I really played good grass tennis, and that’s what I will have to take with me.”

Third seed Jessica Pegula was hard to stop in her matchup with Frenchwoman Amandine Hesse, claiming a speedy 6-1 6-2 win in just 65 minutes, followed closely by compatriot Ann Li who overcame German qualifier Anna Zaja 6-0 6-4 in 74 minutes. Meanwhile, eighth seed Laura Siegemund was tested all the way by lucky loser Riya Bhatia in her tour-level main draw debut, as the Indian fought hard through the 2-6 7-6(2) 6-1 clash. Despite Bhatia taking out the first set, Siegemund worked her way back into the contest to dominate the second set tiebreaker and used that momentum to see out the remainder of the two hour and eight-minute matchup. Seventh seed Sara Sorribes Tormo was similarly challenged by Italian Martina Trevisan dropping the second set but recovering well to claim the 6-4 3-6 6-2 result.

The remaining two matches also played out in three, with Frenchwoman Alize Cornet downing Arantxa Rus 6-3 2-6 6-1 in a seesawing battle, while Anna Blinkova was challenged by 18-year-old Clara Tauson, before claiming a 7-6(4) 4-6 6-2 victory in the longest matchup of the day, with the Russian requiring two hours and 16 minutes to shake off the Danish teen.

BAD HOMBURG OPEN ROUND OF 32 RESULTS: