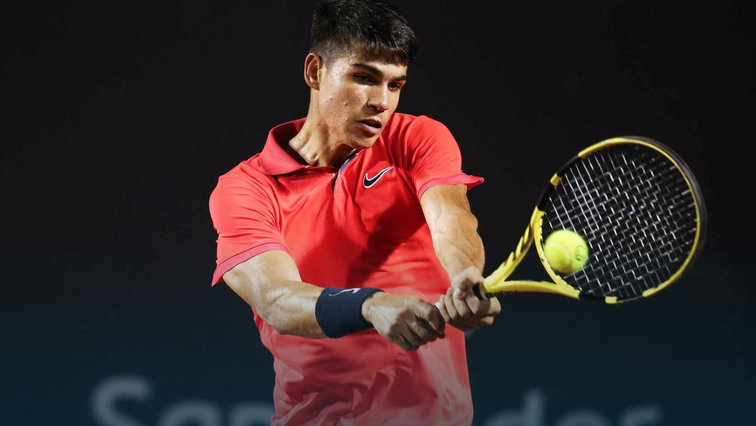 A YOUNG Spaniard with plenty of potential, there is no doubt 17-year-old Carlos Alcaraz is on the way up in the world with a serious talent and flair on the court. Factor in that he is in the unprecedented position of following in Rafael Nadal’s footsteps and breaking onto the ATP Tour scene in the latter stages of the great’s career, and Alcaraz could well be the next clay court star on the professional circuit.

Still young and very raw, Alvarez is a player who has benefited off the unprecedented COVID-19 break in 2020, with a focus on ATP Challenger tournaments to boost his Tour standings, and currently sits 140th in the world – the youngest on Tour alongside fellow talents Lorenzo Musetti (18-years-old) and Jannik Sinner (19-years-old) within the top 300 – which is a huge testament to his development.

Alcaraz has won three Challenger tournaments in 2020, making his tally five for the year – a feat that even in an uninterrupted season is an impressive effort – and given the youngster started his year ranked only just within the top 500, there is plenty of talent there.

Looking at the stats, and the Spaniard is clearly another from the same brand of clay court compatriots already showcasing their wares on Tour, with a 1-1 win rate on the ATP Tour in 2020 given his focus on Challengers, but a whopping 39-7 win rate on the ITF Circuit this season. A 100 per cent success rate across 10 hard court matches is a solid enough record, and then with the addition of his 29 clay court victories for seven losses there is no doubt Alcaraz is an impressive upcoming talent.

Alcaraz has plenty of drive and ambition, telling EFE in early November that he aspires to not only reach the top 100 to enter the 2021 Roland Garros but also complete the year in the ATP top 50.

“I would like to enter the final table at Roland Garros, for which I would have to be a top 100, and finish the year in the top 50. I see myself capable of doing great things,” Alcaraz said. “(2020) has been a great year, which has made me see that I am closer to the goals than I thought.”

The young gun is by no means cocky though, aware that he has improvements to make and willing to put in the hard yards to be the best he can be, with an eventual goal of breaking into the Davis Cup team, but faced with plenty of competition from his compatriots given his nation’s consistent and continual success on the ATP Tour.

“Right now I would say that the serve is what I have to polish the most and I must work thoroughly,” Alcaraz said. “I hope to be there (Davis Cup) one day and it would be a dream come true, although Spain, luckily, has many players in the top 100 and it is not easy to get on that list.”

“The best have been the results I have been able to obtain and the great work done, also in quarantine, and the worst have been not being able to play for five months in a row. After what I have done I really want to start 2021.”