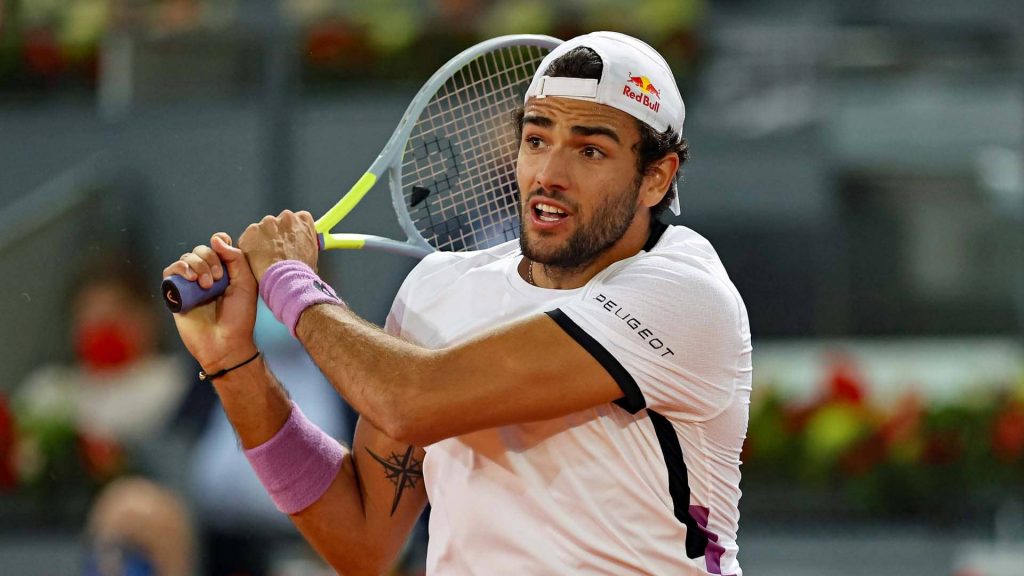 EIGHTH seed Italian Matteo Berrettini has put recent inconsistent form behind him to post a strong semi-final win over Norwegian Casper Ruud and book his spot in the 2021 Madrid Masters 1000 clash. The Italian proved too good for the world number 22, winning 6-4 6-4 in one hour and 22 minutes to secure a spot in the decider against fifth seed Alexander Zverev. Berrettini, who served five aces and only dropped three points off his first serve – and five off his second – did not even face a break point on his way to an almighty win.

“It’s a great, unbelievable feeling, especially coming from Monte-Carlo where I wasn’t feeling that good,” Berrettini said post-match. “I won in Belgrade and now I’m in the final, so I’m really looking forward to playing against Sascha. I hope I enjoy it tomorrow the way I enjoyed tonight.”

Berrettini was unbeatable on serve, and managed to grab the required break in each set to down the clay court specialist Ruud, to step up and reach his maiden ATP Masters 1000 final, becoming just the third Italian in history to do so after Fabio Fognini and Jannik Sinner – both in the past three years.

“My serve is my weapon, but today I think I returned a lot and I put pressure on him,” Berrettini said. “I was just playing more aggressive. He’s kind of like me, he likes to run around the forehand and play with spin. But I guess today I was playing better than him.

“The other time he beat me, so it’s always a great fight against him. He [reached] three semi-finals in a row [also Monte-Carlo and Munich] so he was feeling confident. I guess that’s why I’m maybe even more happy with my win today.”

The Italian hit 24 winners and kept his defensive pressure high as Ruud could only manage the seven for the match. Despite the win, Berrettini knows who good his next opponent is – Zverev – considering his last two victories at Madrid.

“I saw him, he’s playing really good,” Berrettini said. “He’s solid. “He moves well. “For his height, he’s really good. “He serves well. “I mean, he’s in the final. “He beat Rafa [Nadal] and Dominic [Thiem], probably the best players on clay.”

After toppling Nadal in the quarter finals, Zverev claimed the semi-final win over the next best clay courter in reigning US Open winner Thiem, 6-3 6-4. The German served six aces to one and won 78 per cent of his first serve points off a 66 per cent clip. He broke Thiem three times from 11 chances, and was only broken once himself in a dominant performance against the Austrian. Zverev said he was pleased to get the win against an opponent who more often than not had his measure.

“We have had some fantastic matches. We have played the biggest matches in the world. We have played Masters 1000 finals, we have played Grand Slam finals and [the rivalry] is still developing,” Zverev said post-match interview. “It is still going to go on for a few more years. Hopefully we will play a few more amazing matches.”

After defeating Thiem in the 2019 Madrid Masters 1000 final, Zverev has reached his second decider at the event, and will need to take down Italian Berrettini to claim another huge title.