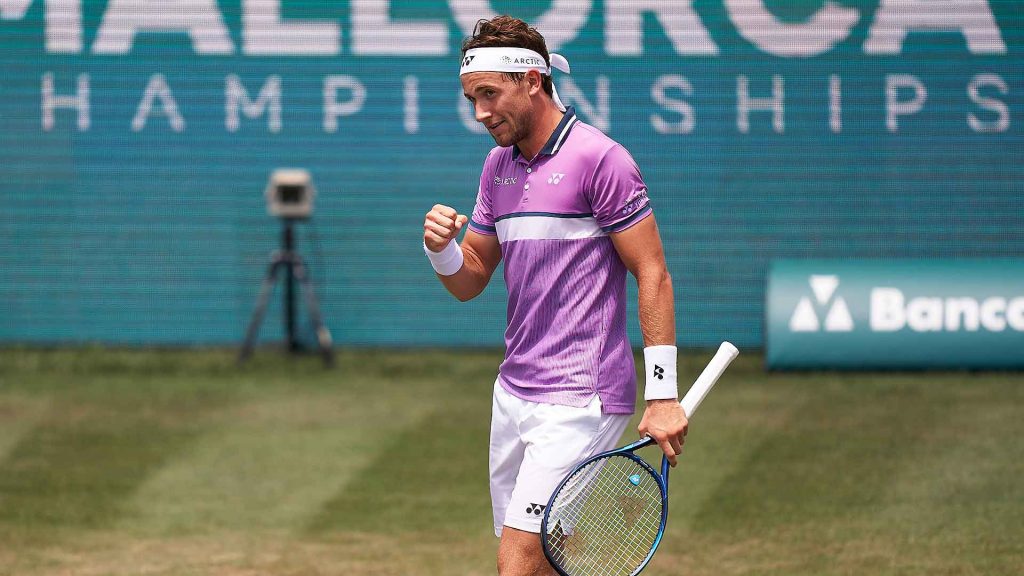 THE opening day at Eastbourne was rained out, seeing the event pushed back a day as Day 2 went business as usual at the Mallorca Championships in Spain.

Two of the three seeds proved successful on the second day, as Casper Ruud and Karen Khachanov both claimed wins to open their accounts in the first round. Ruud required one hour and 39 minutes to earn victory over Frenchman Gilles Simon, utilising his 80 per cent winning rate off his first serve to come away with the 6-4 7-6(4) result. Whilst Ruud was not quite as potent off his second serve, winning just seven points from 16 chances, he saved three of four break points and converted three of his five break point opportunities.

Khachanov needed three sets, and two hours and 14 minutes to claim the win over a second Frenchman, qualifier Lucas Pouille, 7-6(7) 3-6 6-4. He hit 13 aces throughout the encounter, overcoming a second set deficit to fight back to his opening set form and used his consistency to power through Pouille’s efforts. Things went differently for eighth seed Dusan Lajovic though, as the Serbian fell to qualifier Lukas Klein 6-4 7-6(2). Despite hitting seven aces for zero double faults to Klein’s four and four, Lajovic was not as effective on the return, winning just 24 points off Klein’s service games. Klein, to his credit, won 53 per cent of points overall in a solid match for the Slovakian.

A trio of Spaniards played on home soil, with just one in Feliciano Lopez earning the win. Lopez defeated qualifying compatriot Nicola Kuhn 6-1 7-6(4). Despite dominating the first set, Kuhn came out flying in the second with a point to prove, with just the tiebreaker not going the qualifier’s way. Overall, Lopez won an excellent 84 per cent of points off his first serve, and backed it up with a 64 per cent winning rate off his second in a fairly consistent showing.

The third Spaniard in Jaume Munar fell to Tennys Sandgren 7-6(3) 7-5, with that matchup taking just a tick over two hours, while the battle between Italian Stefano Travaglia and Argentinian Guido Pella went the same distance, but with reversed results 7-5 7-6(4), as the Italian claimed the tight win. Travaglia’s compatriot Salvatore Caruso was not quite so lucky, falling to Czech Jiri Vesely 7-6 6-2, whilst the remaining matchup of the day between Corentin Moutet and Lloyd Harris saw at least one Frenchman get the chocolates, beating the South African 6-4 6-2.

MALLORCA CHAMPIONSHIPS ROUND OF 32 RESULTS: