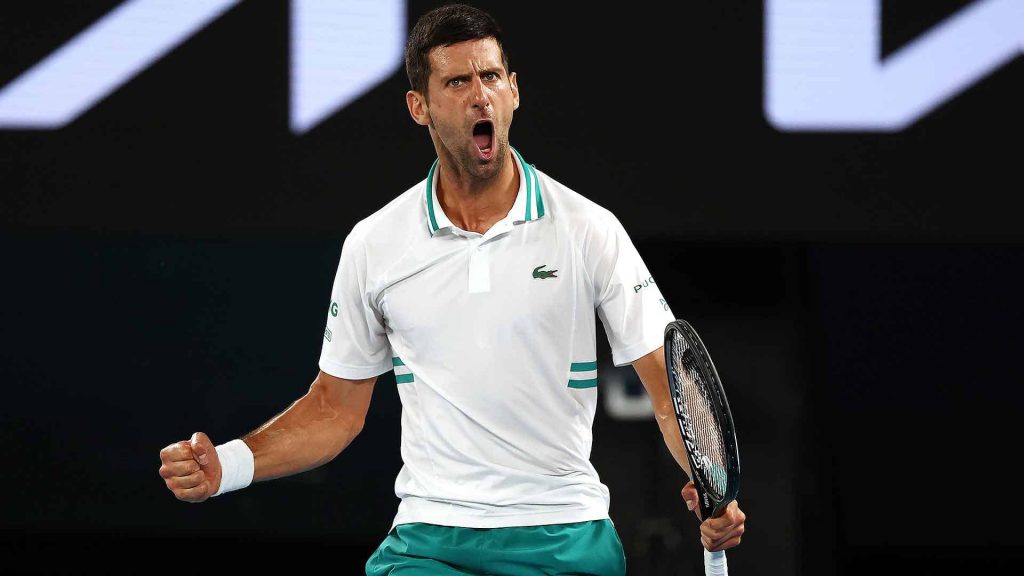 NOVAK Djokovic will look to extend his stranglehold on the first Grand Slam of the year, having made his ninth Australian Open final after a relatively straightforward win over Russian qualifier Aslan Karatsev. The 114th ranked Karatsev was the talk of the town the last two weeks, rolling past Top 30 players to reach a well deserved semi-final. Unfortunately it was the end of the road for the underdog as he met the world’s best player, and the top Australian Open player in history.

Djokovic won 6-3 6-4 6-2 in one hour and 53 minutes on Rod Laver Arena, booking his spot in the final to await the winner of either Daniil Medvedev or Stefanos Tsitsipas who play today. In his semi-final, Djokovic hit a whopping 17 aces to six, and finished with a serving efficiency of 68 per cent. He won 71 and 62 per cent of his first and second serve points in a dominant display. Karatsev was far from disgraced on serve, but was not as efficient, putting in just 52 per cent of his first serves, and then winning 65 per cent of them. His world class opponent took advantage off his second serve by winning 66 per cent of points on return.

In terms of winners, Karatsev actually hit more in-court with 18 to 13, but it was the consistency of Djokovic to his just 14 unforced errors, while the Russian conceded 30. Both players created numerous break points despite Djokovic’s dominance on serve, but again the world number one made the most of his chances, taking six of seven opportunities, while Karatsev finished off just two of his five chances. Overall, the Serbian star was just too good and booked a ninth Australian Open final, of which he has an 8-0 record.

“This is the best I’ve felt in the entire tournament, I had no pain, my best match by far,” Djokovic said post-match. “I’m thrilled to feel this way for sure. Recovery is the priority right now. I’m feeling the ball well, I’m playing well, I’ve had enough match play. Right now it’s about gathering all the necessary energy for the most important match of the Australian Open.”

The world number one now has an extra day to recover compared to his opponent, as he waits to find out which of Medvedev or Tsitsipas will reach the final. Djokovic said he knows whoever makes it through will be a worthy opponent.

“Stefanos did incredibly well to somehow to turn it around,” Djokovic said of the fifth seed’s five-set comeback against Rafael Nadal. “That was probably the best match of the tournament so far, such a high level.

“Speaking of high level, Medvedev is the guy, playing the highest level of anyone in the last three or four months. “It’s going to be really interesting, always high intensity between them. “I’m going to take the popcorn and enjoy it.”