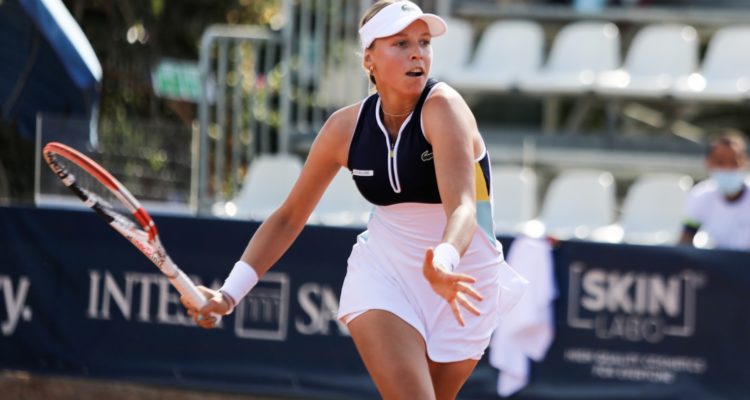 CAMILA Giorgi is the sole remaining home nation hope in the semi-finals of the 31st Palermo Ladies Open after a come-from-behind win against seventh seed Dayana Yastremska. Giorgi won through in a two-hour and 52-minute struggle with Yastremska serving for the match in the second set, and being 3-1 up in the third, only for the talented Italian to keep fighting and win, 4-6 7-6 6-3.

It was a memorable win for the world number 89 against the seventh seed, considering both players had real hit-and-miss serving performances. They paired combined for 15 aces and a whopping 28 double faults, but it was Giorgi who had the greater success off both her first and second serve points to move through to the final four.

Giorgi was the sole Italian through to the semis after Elisabetta Cocciaretto and Sara Errani were bundled out against higher ranked opponents in their respective quarter finals.

Fourth seed Anett Kontaveit ended the run of teenage talent Cocciaretto, but not with a fight, taking three sets to finally dismiss the 19-year-old, 6-1 4-6 6-1 to book a spot in the semi-finals. The Estonian who had a magnificent giant-killing run at the Australian Open this year will face off against top seed, Petra Martic in the final four following Kontaveit’s one-hour and 54-minute victory.

Meanwhile Martic and Belarusian Aliaksandra Sasnovich put on an absolute show with a combined 99 winners between them, playing some remarkably clean tennis in a straights sets win for the Croatian. The top seed took two hours and 18 minutes to get the job done against the elite serving Sasnovich, but she nudged ahead with 54 winners to 45. Sasnovich remained in the contest due to her high serving efficiency of 79.5 per cent, but then butchered chances to take full advantage of her serve, winning only half of her first serve points. Both players broke each other four times, with the Belarusian creating more opportunities, but Martic able to save seven of 11 compared to three of seven.

Meanwhile Frenchwoman Fiona Ferro advanced through to the semis following a relatively easy victory over Errani. The world number 53 posted a 6-4 6-1 win over the former world number five in just an hour and 28 minutes, in a one-sided affair. In a lobsided statistic, Errani was lucky to even win the five games she did, winning a total of 21 points off her serve for the match, broken a whopping six of eight games. Three of her five successful games were actually breaks, with Errani’s conservative serve not proving helpful against the fierce Ferro.

The Frenchwoman on the other hand won 61 per cent of her first serve on her way to three aces, and while she might have been broke three times, was superb upon return with her six breaks and booked her spot in the semi-finals against Giorgi.