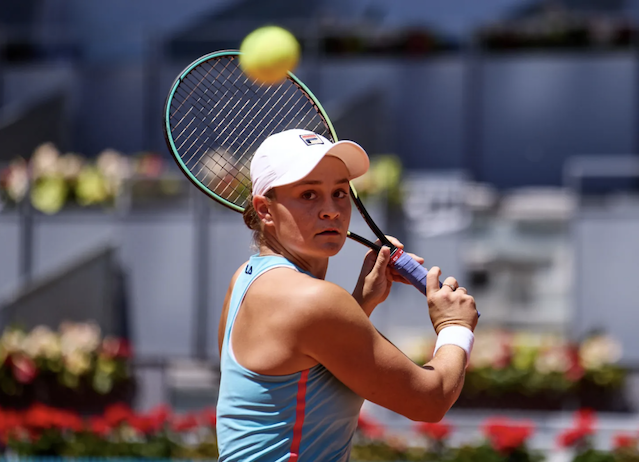 WORLD number one Ash Barty has held firm to win her eleventh three-set contest in 2021 to advance through to the semi-finals of the 2021 Mutua Madrid Open. She has only dropped one three-set match – that coming at the Australian Open against Karolina Muchova in the quarter finals – but has claimed ever other full-distance match. The most recent was her quarter finals victory over another Czech, ninth seed Petra Kvitova, 6-1 3-6 6-3.

“I think it’s important not to panic, but everyone emotionally has different ways that they play on the court. I have always been quite calm on the court. That’s just always been my demeanor. But for me, it’s more about just trusting myself and knowing that we just keep chipping away and trying to find a way – and then give yourself time to do that.”

Barty moved through to the final four with the win in one hour and 48 minutes, serving six aces to five, and winning 63.5 and 62.5 of her first and second serve points. She also saved five of seven break points, and broke her opponent four times from 12 opportunities. The win means Barty is strong favourite to take out another clay tournament, with the opponent she beat in the final at the Porsche Tennis Grand Prix – Aryna Sabalenka – the only seed remaining in the Madrid Open.

The Belarusian accounted for 13th seed Belgian Elise Mertens who was under clear duress, retiring at 6-1 4-0 down in the second set. Sabaleka had only dropped two points off her first serve by that stage – though was serving at a horrible 44.7 per cent efficiency – and nine points off her second serve. She saved all three break points, and broke Mertens a total of four times, and restricted the Belgian to just 15 points for the match. The pair often combine in doubles, and the fifth seed certainly had concern for her close friend who retired due to a left thigh injury.

“I feel really sorry for this, and I hope that she will get better soon,” Sabalenka said post-match. “Hopefully she will be ready for the next one in Rome.”

Before she could potentially face Barty, the Belarusian will come up against unseeded Spaniard Paula Badosa who is in some great form this year. Badosa accounted for eighth seed Belinda Bencic 6-4 7-5, defeating her for the second time in a fortnight having knocked her off at the Volvo Car Open in three sets. This time it was a lot easier, and with a win over Barty last tournament too, Badosa will be confident going forward, though admitted she was not so much heading into the match.

“I have to be honest, I was very nervous today,” Badosa said post-match. “Because sometimes these matches are a little bit tricky when you played her two, three weeks ago and you think in your head that you have that opportunity to make a semifinals. I was quite nervous, but I’m quite happy that I could control all the nerves and I could play my game quite good.”

In the other quarter final, Russian Anastasia Pavlyuchenkova advanced through to the semi-finals to take on Barty for a spot in the final, needing just under two hours to win in a couple of tiebreakers against Muchova. The unseeded Russian won 7-4 in the first tiebreaker and 7-2 in the second one to bring about a stirring victory.